The murder of Madeleine McCann: searches near Hanover

The German police have been searching an allotment between Hanover-Ahlem and Seelze-Letter since the early hours of the morning. According to the public prosecutor's office in Braunschweig, the action is linked to Madeleine McCann, who disappeared 13 years ago. The site was cleared, and an excavator is also in use. 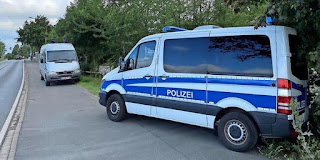 The police have been searching the area directly on the Linden branch channel since this morning (July 28, 2020) with a large-scale operation . According to HAZ information, the area between Klöcknerstraße, Kanal and B441 was completely cleared, and a mini excavator is also in use. The investigators are silent about exactly what is suspected there.
A spokeswoman for the Braunschweig public prosecutor's office only confirmed that it was a joint action with the Federal Criminal Police Office (BKA). According to HAZ the searches are related to Madeleine McCann murder.
Source: HAZ