The abduction of Madeleine McCann: What do I think about the last developments?

Many readers asked me what do I think about the last two months developments on Madeleine McCann crime. This post will not be only based on objective facts, but also on subjective interpretations of the official statements and the news. 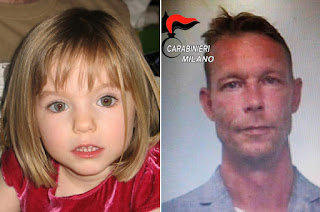 Since 2013 it was my thought that Madeleine McCann was abducted by a burglar, and killed soon afterwards. I think that the German authorities now have proof that Madeleine is sadly dead, and that that proof could be imagery (pictures or videos) found in Christian B. belongings. But also that that alleged imagery would not be enough to link Christian B. directly with the crime.

So, the Bundeskriminalamt (BKA) and the German prosecutor, H. Christian Wolters, need to link Christian B. with the crime scene. A first step is the call received by Portuguese mobile phone number +351 912 730 680, from 19:32 to 20:02, on May 3, 2007. The call demonstrates that the user who received the call was in the zone of Praia da Luz at the time, and that it was possible for this person to walk to Apartment 5A, the primary crime scene, reaching it between 21:10 and 22:00. But BKA and Wolters need to prove that the person who was using the mobile phone and received the call was Christian B.


In a recent email Wolters was very kind to tell me that "we are currently restricting ourselves to the assumption that the mobile phone number that we assign to our suspect was between 7:32 p.m. and 8:02 p.m. in the phone cell that also covers the McCann family's apartment on May 3, 2007" and that it is "currently unclear whether and when we will file charges against the suspect for the murder of Madeleine McCann".

Clearly they need to find a solid link between Christian B. and the crime. A great step would be finding the person who made the above mentioned call from the mobile phone +351 916 510 683. But there are other possibilities, for example finding pictures, videos, or witnesses who could demonstrate that link, or maybe DNA evidence collected in Apartment 5A the day after the abduction could match Christian B's similar DNA profiles.

I think the German BKA and Wolters are in the right path, they solved the crime, but need more evidence to file charges against their suspect.