The abduction of Madeleine McCann: what will the German prosecutor and the BKA do from now?

I will try to guess the following steps that the German prosecutor of the Braunschweig public prosecutor's office, Hans Christian Wolters,  and the Bundeskriminalamt, will do from now, regarding the case of Madeleine McCann and his main suspect, Christian B.
﻿ 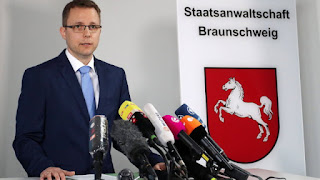 
2.  They will try to find the user of Portuguese mobile phone number 916 510 683 who called Portuguese mobile phone number 912 730 680. The call was on May 3, 2007, from 19:32 to 20:02.
3.  They will try to confirm that the user of Portuguese mobile phone number 912 730 680 was Christian B. The mobile was somewhere in Luz, no more than 2 or 3 km from apartment 5A, and the abduction took place on May 3, 2007, between 21:10 and 22:00.
4. They will try to find evidence (for example DNA, clothes, or a body) that Madeleine was in one of the places where Christian B lived. Mainly in Foral, but also in Monte Judeu.
5. They will try to find witnesses, people who may know what happened that night, and that should be encouraged to talk now that the main suspect will be in prison for a while. The people may be persons who were close to Christian B by the time, like Nicole from Foral, or his "British girlfriend" (María?), or other people who may circunstantially know what happened.
I do not know more of the "concrete evidence" Wolters and the BKA have against Christian B. Even the Scotland Yard Operation Grange team and the Portuguese Policía Judiciária do not know. So my list is almost surely not complete.

The Daily Star have just published that "[d]etectives are now checking with banks in Portugal to see if the pay-as-you-go [mobile phone] number [916 510 683] was topped up at an ATM, according to reports." See item 2. above.